What a cool way to launch an art blog. It’s safe enough to say that near the top of my favourite { visual } artistic influences are, in no particular order: Henri Matisse, Gustav Klimt, Alphonse Mucha, and Albrecht Dürer.

Those of you who know even one of Dürer’s works should understand the appeal. My style of illustration and sketching draws more on Matisse { pun not intended 😉 }, but Dürer’s Rhinoceros has lodged in my imagination ever since I saw it for the first time, who knows how many years ago. { Yes, I know this is a rabbit: } 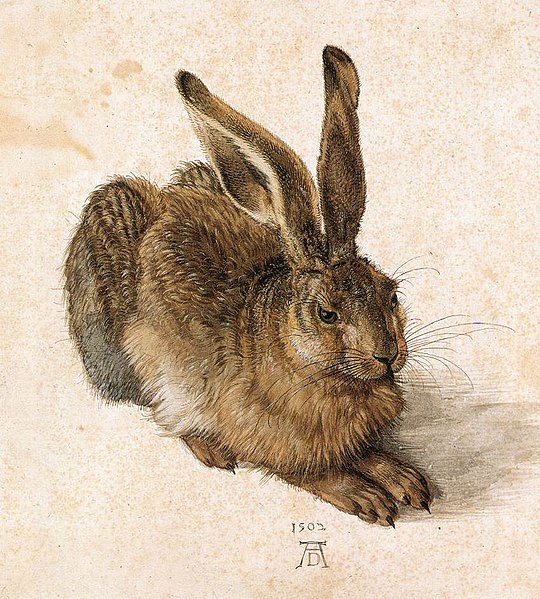 In this phase of my life, my spiritual “side” has truly become the conscious basis for my whole expression. Last year my focus was drawn back to Rhinoceros by Jean Rockefeller’s blog, Jack’s Corner. According to her information, three main holders of feminine energy on the planet are Elephant, Lion{ /ess }, and Rhinoceros. Thus another item was added to my long list of ideas: a work that honours all three “beasts” equally.

My inner child was really happy about all this, as it also offered and inspired a chance to create my own Rhinoceros unicornis in homage to Dürer. A google search ensued, while I inspected what is known about the history of Dürer’s piece — side stories to which are pretty fascinating for an art geek such as myself.

First Woodcut of a Rhino, from the Giovanni Giacomo Penni poemetto 1915
Source: Wikimedia.

… date back to antiquity, of course.

Meanwhile, Back in the West

In the year of 1515, and according to Dürer’s engraving, “ on 1 May* there was brought to the most puissant King Emanuel of Portugal / to Lisbon from India / just such a living animal. they call it Rhinocerus … . ”

*Or maybe it was May 20, as the article states. Whatev’s. Honestly.

In any case, it seems the animal was not treated at all kindly in its role as the King’s new “possession” but of course sparked the curiosity of a culture who had never seen the like — well at least not since Roman times. A series of letters were sent to Dürer in Nuremberg { for map enthusiasts, the map overlay link is fairly worth it }, one including a sketch by an artist whose name has not been preserved to history. This inspired Albrecht to make a few drawings and finally our beloved, famous woodcut.

It has not escaped my notice that 2015 is the 500-year anniversary of the masterpiece, and as such I’ve had a printout on my bulletin board all year — egging me on to create my version. A couple of weeks ago, researching and preparing for a day of sketching, I happened to discover that 22 September is World Rhino Day. How about that for timing?

In the process of reigniting my artistic practice over the past few years, I’ve also realigned with my own native sketching style, which I’ve had since forever { or so }. I’ve given it a modern twist whose reward is digital vector art that can be tweaked and adjusted to perfection — as well as printed without concern of random scan quality. In coming years I’m keen to return to my first love: watercolour, but for now am really enjoying this new way of illustrating sketches.

I thereby present my in-progress offering in honour of Rhinoceros — and all of my artistic muses — with a special tip of the hat to Albrecht Dürer. Now – When is World Octopus Day?